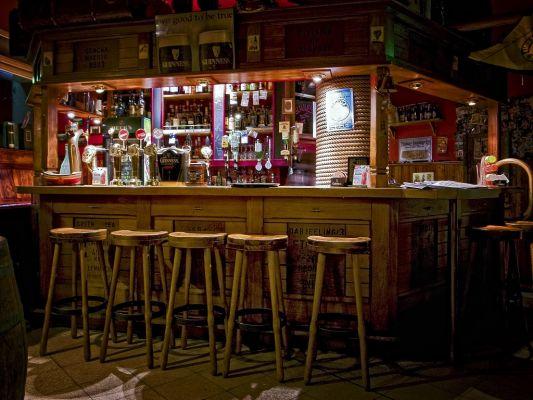 Fat landlady or the "fat innkeeper" was Anna Stanscheck, who had made a name for herself some eight decades earlier pub which she ran with her husband. Known for her big heart, her stews and her love for the students of the nearby art school. At the time it was an institution a Berlin, for decades a stronghold since the heady moments of the 60s events. The place retains a mixed clientele of students and locals looking for large portions of traditional German dishes homemade. Nine different beers on tap and thirty housemade spirits and liqueurs.

Year of opening 1892, as his name proudly makes clear. It begins as a Wine & Champagne service, soon dedicates itself to distillates and the manufacture of liqueurs, opens a tasting room and over time accompanies the ups and downs of the city's history. Countless anecdotes and singular stories fill the soul of this place. As in the days of its founder Wilhelm Hoeck, the kitchen uses only fresh local and seasonal products. Gnocchi o homemade noodles, game from the forests of the state of Brandenburg, fish and meat from producers selected from the region. Specialty: the Europe's best black pudding and the Hoecksche sausage. The site is also in English.

The name means "Landfill 3“It is where the Russian tanks were deposited 25 years earlier, under the arches that support the S-bahn urban railway. In the center, between Museum Island and the Brandenburg Gate, an old Berlin restaurant is now housed, promising the special atmosphere of its historic rooms and a culinary journey through original Berlin cuisine. The particular design and the decorative objects manage to attract attention. Menu in all languages.

In the Prenzlauer Berg district it is the oldest kneipe, dating back to 1913, and has been run by the family for four generations. Inside you are surrounded by old engravings, prints and photographs that recall the history of the neighborhood. His own nostalgic Berlin style, capable of attracting numerous visitors, including tourists and locals, including personalities known to the public. Offers an extensive list of typical German dishes and you can also find the site in Italian.

A Berlin the corner bar is typical, and the name "Thomas's corner”Remarks this well. Warm and welcoming environment with seating at the counter for the tasting of beers and tables to have a hearty meal, as memory dictates. Traditional dishes simple and seasonal and an ever-changing weekly menu. Catering for private parties are also organized, to celebrate in the presence of an old piece of Berlin life.

It was when 1902 Max e Moritz opens. It has changed a lot since then but still retains the family area it originally created. Today an Art Nouveau setting, finely painted coverings, stuccoes and reliefs that depict the history of this place that is over a hundred years old. The venue in the heart of Kreuzberg 36 is large and has several floors, the cuisine is popular, retains much of the original menu made up of a wide choice of typical German dishes which you can find illustrated in detail on a multilingual menu (also in Italian).

“Dall'orfano” is the Italian name of this kneipe, one of the few originals in the Prenzlauer Berg district to have been there for 90 years, although it has undergone some changes over time. It was the bar on the corner that opened at six in the morning to sell beer to the night shift workers, along with wheat and meatballs, then became a "Bierstube" the local brewery specializing in the sale of "Schnitzel" (cutlets) until you get to the restaurant. It offers typical German cuisine: dumplings with smoked pork, roast marinated in vinegar, goulash, liver rolls and pork knuckle. The menu can be downloaded from the site in PDF, also in Italian.

This here is the kneipe of the Schiller Theater in Berlin, in Charlottenburg district. Before becoming the Schillerklause in 1951, the hall was a costume designer's fashion salon for a few years Wimmler. Then the wife of the theater's technical director took over and transformed it into the one we know today. It was frequented by many well-known personalities, actors and artists of all kinds. The restaurant welcomes you in a very welcoming retro atmosphere, clearly linked to its past, and offers both small meals and typical dishes.

Literally "The hen", it retains over a hundred years of hospitality since 1908. The restaurant, built in 1888 as a residential house, preserves the memories of the turbulent history of the city and the classic style of the Alt-Berliner Wirtshauses, the”Old Berlin tavern". The owners, for generations, have preserved over time the values ​​of hospitality and friendliness and together with these the love for hearty traditional Berlin cuisine. The offer as a whole is the original, rich and tasty one. You can also find the site in English.

Located directly in the pretty scenery of Kollwitzplatz, in quartiere di Prenzlauer Berg, on the corner of Husemannstrasse and Wörther Strasse, lies where the wall once ran, in a place closely linked to the history of the GDR. The gradual change in the appearance of the neighborhood, linked to historical events, is represented in the photos inside the restaurant, today a mix between Art Nouveau and modern interiors. The menu lists a long series of typical Berlin dishes and Brandenburg, yesterday and today. Here too, you can find the site in English.

Humboldt Box and the rooftop terrace on the Berlin Palace ❯

Hard Rock Cafe Berlin: a little bit of America in the heart of Germany