THEBerlin-Bramdeburg Airport is, from 31 October 2020, the only international airport in Berlin and all flights, both of the national and low cost airlines such as Ryanair or EasyJet, land here.

Before that date there were two Berlin airports, Tegel and Schönefeld. Tegel was definitively closed following the inauguration of the new airport while Schönefeld was incorporated by the new airport, forming Terminal 5 of Berlin Brandenburg airport.

Berlin Brandenburg Airport is located 20 km south-east of the German capital, in the municipality of Schönefeld.

How to get from Berlin airport to the center

The solution we recommend for getting around from the airport to the center of Berlin (and vice versa) is definitely the train, the airport is in fact equipped with a railway station in each terminal which makes travel quick and easy. There are also numerous buses that could be useful to reach more peripheral areas of the city, in addition of course to official taxis of the municipality of Berlin. 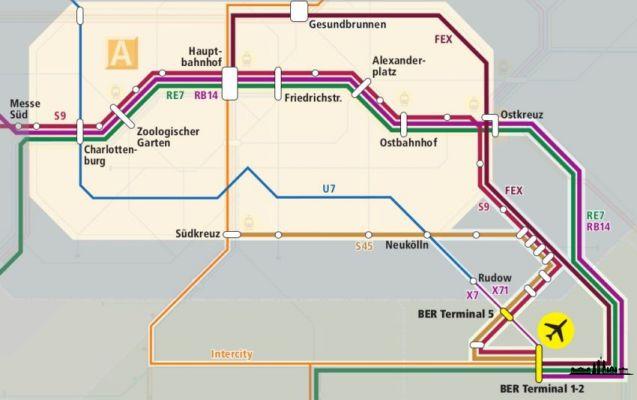 As anticipated, the preferred means of transport from the airport to the center is the train. The airport has two distinct railway stations, one under Terminals 1 and 2 and another a 10-minute walk from Terminal 5.

Airport Express (FEX) express trains terminate at Hauptbahnhof central station stopping only at Ostkreuz and Gesundbrunnen and take only 30 minutes to cover the route.
The regional trains RE7 and RB14, on the other hand, in addition to the aforementioned stops, also stop at Ostbahnhof, Alexanderplatz, Friedrichstraße, Zoo, Charlottenburg and Spandau using 36 minutes.

If you land or depart from the Terminal 5, your best bet is to take one of the surface trains S-Bahn. The line S9 it is recommended to reach the center (consider 50 minutes to reach Hauptbahnhof) while the line S45 for the southern districts. The frequency of the trains is approximately every 20 minutes.

However, the S9 and S45 S-Bahn trains stop at all terminals (both T1-2 and T5) and are therefore also the best way to travel between them.

The cost of tickets, both S-Bahn and Airport Express, is 3,60 € to reach the center of Berlin.

The buses most used by tourists are the buses X7 e X71 that connect the airport with the Rudow metro station on line 7. The travel time between Terminal 1 and Rudow is 18 minutes. The X7 bus leaves every 5 minutes while the X71 bus every 20.

The cost of a taxi ride from the airport to the city center is not fixed, but always regulated by the taximeter. The average cost to reach the city center (eg Alexanderplatz) is approximately EUR 50 and the travel time is approx 30 minutes in normal traffic conditions.

La Berlin WelcomeCard is the city card of the city of Berlin which, in addition to guaranteeing free admission to most places of interest, allows you to travel for free on all public transport, including trains to and from the airport. It is available in sizes from 2 to more days and is highly recommended if you are in Berlin for tourism. 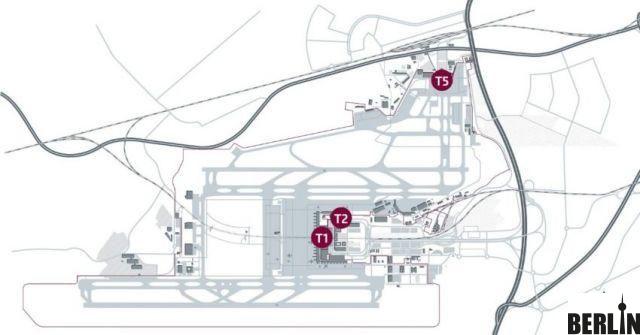 Berlin Brandenburg Airport is made up of 3 terminals, distributed however in two branch offices. The new Terminals 1 and 2 are adjacent and close to each other, while Terminal 5, consisting of the old Schönefeld airport, is further away and it is necessary to take a means of transport to reach it.

To travel between Terminal 1/2 and Terminal 5 we recommend taking the S9 or S45 S-Bahn trains, which take about eight minutes. However, keep in mind that when you arrive at the “Flughafen BER - Terminal 5” station it will take you another 10 minutes on foot to reach Terminal 5. To move between the terminals, you can also use buses and taxis, which will take you to the terminal doors.

Bus and tram in Berlin