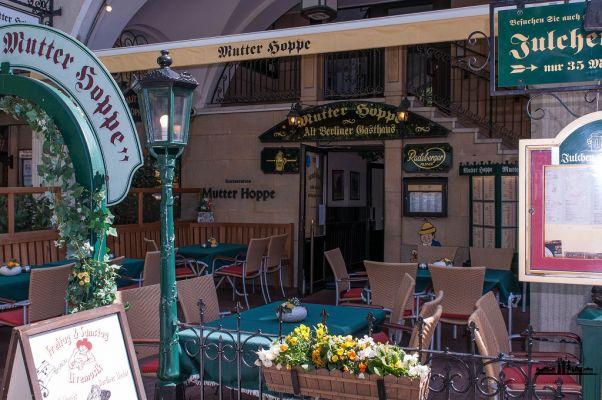 The founder of the brewery It was Lemke, began building his first production plant in a friend's garage in 1998. Oli's euphoria soon involved his group, friends improvised builders and transformed one of the abandoned premises of the Hackescher Markt station in a brewery (in the style of the Heineken Factory in Amsterdam), starting this story. When, in 2003, the historic brewery closed its doors Tiergarten spring, at the time an institution for students, it was decided to carry on this business and sell Lemke beer internally. The premises became popular and the demand reached higher and higher levels. In 2004, the  Leopold's brewery at Alexanderplatz (reopened with the name Brauhaus Mitte), an ancient micro brewery where Oli Lemke had his first experience in production as an intern. Lemke beer is homemade with original Berlin natural ingredients. In 2015, a step forward was made, with the opening of its own bottling plant, which today offers numerous qualities of beer on the market.

We are in the Nicolai neighborhood, in the center of Berlin, between Alexanderplatz and the Brandenburg Gate. The initial idea was to recreate an old Berlin pub dedicated to Weisse, a light and very tasty quality wheat beer traditionally brewed in the city. L'Old Berlin wheat beer parlors today it is also a restaurant, the style remains rather classic, even if in recent times it has shifted towards a higher and a little less authentic profile. What remains unchanged and authoritative is its offer. In addition to the recipe of the White original, the variants Verde (with woodruff), Red (with raspberry) and more recently the flavors of green apple, white peach and wild strawberries are sold. The venue is very large and has outdoor seating.

We are still in Mitte, a modern building in the pretty Nicolai neighborhood, contains a large pub that brings together rooms of different sizes, wooden furnishings, with over 250 seats inside and 350 outside on the panoramic terrace overlooking the Spree river, the beer garden. Dedicated to tapping since 1992, every year they produce and serve abundant quantities of Georg Pils, a Pilsener, certainly the most popular beer quality in Germany, light and low fermentation. The cuisine is also reminiscent of tradition and is strictly based on local products. We could say that Georgbräu is a successful experiment, of a typical German pub housed in an avant-garde building.

Located in the oldest building in Mitte, dating from 1749, Weihenstephaner was a gift from King Frederick William II of Prussia to the writer Anna Louisa Karsch. An environment rich in history, with several classic-style rooms, finely cared for and suitable for different moments and desires, including the exclusive "Gewölbekeller", the vaulted cellar. Internally it has a total of 180 seats while the beer garden outside accommodates up to 250 guests, one of the quietest shelters to be found in the lively center of Hackescher market. The traditional German cuisine it is accompanied by different drinks but above all BEER. Founded in 1040, the Weihenstephan brewery of the Bavarian State it is the oldest in the world still existing and can boast beers of the highest quality. From the soft "Weihenstephaner Original"to the strong and malty"Weihenstephaner Korbinian", up to the exclusive wheat beer specialties. The selection is for aficionados.

To the last instance

The restaurant and brewery "To the last instance"it is the oldest in Berlin that has become a real attraction in the capital. Its first documented mention dates back to 1561 but it is in 1621 that a former equestrian agent, of the prince then in charge, creates a laboratory for the production of gin" Biedermeierstübchen "laying the foundations of what is the current restaurant. After the Second World War it was necessary to reconstruct but inside the history is perceived, elements linked to tradition and a classic and well-kept environment which has always been the choice of famous personalities and international artists. The venue incorporates two restaurants, a private lounge and a beer garden for outdoor seating. The cuisine is that of Berlin, made with exclusive regional products and a wide range of beers, a section dedicated to “tBerlin radition on tap”And a series of bottled beers, the production is entrusted to the Radeberger Group, a colossus in German beer culture and faithful to a certain regionalism.

The name of the restaurant is inspired by the professor Theodor Mommsen, historian and jurist and the first German to receive the Nobel Prize for Literature. After his death in 1902, a street in the Charlottenburg district, Mommsenstrasse, is dedicated to him. Right there, in 1905, the pub was inaugurated which takes the name of "Mommsen-Eck"and still maintains it today, in the Potsdamer Platz position. A solid German cuisine e a wonderful selection of beers, a comfortable and slightly nostalgic place to be enjoyed in the midst of the hustle and bustle of modernity in today's neighborhood. Nearby, the Weinhaus Huth, the only house left standing on Potsdamer Platz, after the incredible night of November 9, 1989, when the Berlin Wall fell.  Mommsen-Eck it is also called "House of 100 beers”(The house of 100 beers) why the menu features 100 different bottled beers, including some of Belgian origin. The choice is more than vast.

Beer and gastronomy in the Crash but also art, music, culture. The gastronomy area on the ground floor has about 200 seats, in summer, about 100 seats are added in the open air Oranienburgerstrasse. A rear room suitable for about 20 people, offers space for discussions, presentations, conferences, seminars, but also private parties. Since 2004, in the basement, there is theCrash CLUB with bar, stage, lighting, audio equipment, everything you need to host events: concerts (Pop - rock - jazz), performances, workshops, dance lessons. The venue is known for its range of over 100 beers, more than 40 whiskey brands and original coffee shop products.

Located in a quiet area in the historic Spandau suburb, a small district in the Mitte district which contains the largest concentration of nineteenth-century buildings. The traditional bar located on a triangular lot, internally with simple furnishings, wooden interiors and relics scattered around the walls, in summer you can find the few seats on the sidewalk in front of it free. Here, the traditional kneipe embraces a trendy style.

Il Marcus-Brau, founded in 1982, today it is both a bar, a bistro, a pub and a restaurant. It has remained a small family-run business which, since 2000, has started producing its own beer. The two types are the Marcus Bräu Pils (clear) and the Marcus Bräu dark, two natural beers with a full-bodied yeast flavor but the whole range is vast. Rustic setting, welcoming and with a small terrace included, in addition to good beer you can also taste a decent range of dishes that follow traditional German recipes.

Charlottenburg: The chic and elegant side of Berlin ❯

add a comment of Berlin breweries and breweries, here are some of the best