Who I am
Tassilo Kubitz
@tassilokubitz
EXTERNAL REFERENCES:

Il Berlin Wall (in German Berlin wall) was a wall that divided Berlin from 1961 to 1989 during the years of the Cold War. Built by the German Democratic Republic from 13 August 1961, it had the purpose of separating the western part of the city, controlled by the American, French and British forces, from the eastern part, controlled by the Soviets.

Over the years the Wall also served to avoid massive emigration from the countries belonging to the collapsed area USSR, and made that "Iron CurtainWhich separated, both conceptually and politically, Western Europe from the Eastern Bloc during the Cold War.

Little is left of the Berlin Wall at its original site, which was destroyed almost everywhere. Many pieces of the Wall have been damaged, both by locals who hate to think of those years, and by tourists, who have appropriated fragments to take home as souvenirs.

Other isolated fragments, street lamps, checkpoints such as the famous Checkpoint Charlie and a couple of watchtowers still remain visible today in various parts of the city.

The part that still maintains the most original aspect of the authentic Berlin Wall today is undoubtedly the section around Bernauer Straße, where today stands the Berlin Wall Memorial and Documentation Center.

Map of the Berlin Wall

The justifications for the construction

To justify the construction of the wallOn both the Soviet and Western sides, various official excuses were found to sweeten the pill for the city's residents, who found themselves literally imprisoned overnight.


While it was said that the West wanted to protect itself from continuous migration of the citizens of Eastern Europe to avoid a Russian takeover on the Western front, on the other the Socialist Republic stated that the erection of the wall, among other things on the land it occupies, would represent a "anti-fascist bulwark”And would have prevented Western spies from intruding on eastern territory.

The Berlin Wall was long more than 140 kilometers. In June 1962, a second parallel wall was built about 100 meters further away in East German territory. The houses contained between the fences were razed and the inhabitants moved, thus establishing what later became known as death strip, which was covered with raked sand or gravel, making the footprints easy to see and allowing the identification of any intruders.

The wall was revised several times until 1980, when the extension was completed with the so-called "Supply UL 12.11“, Built with 45.000 separate sections of reinforced concrete. The upper part of the wall was lined with a smooth tube, intended to make climbing and attempts to climb over it more difficult.

The wall was strengthened with fences of mesh, barbed wire, guard dogs and nails, as well as with 116 watchtowers and 20 bunkers. This version of the wall is the one that is most commonly found in photographs, and and is the one that is still visible today in some parts of the city.

The fall of the Berlin Wall

Under the winds of revolution that had affected the neighbor Czechoslovakia, even in East Germany the demonstrations against the Communist regime began to make themselves felt more and more strongly.


At the same time, the wave of refugees leaving East Germany for the West continued to increase, passing through the other states of Europe. It became inevitable to start thinking that the strict policy of maintaining the division between the two parts of the city was foolish.

The Unitary Socialist Party of Germany therefore passed new rules to be able to give citizens permission to cross the wall; the news spread virally so much so that on the evening of the video broadcast of the news, thousands of citizens found themselves along the wall asking to be allowed to go to the other side.

The chaos was now widespread in the streets, the border guards found themselves disoriented and the officers themselves realized they had to give in to the austerity held up to now. The first checkpoints were opened, no checks were kept and the two parts of the city reunited on the evening of November 9 1989.

On June 13, 1990, the East German Army officially started it dismantling of the Berlin Wall, starting from Bernauer Straße and then throughout the Mitte district. The fall of the Wall marked the first fundamental step towards German reunification, which formally ended just 339 days later, on October 3, 1990, with the dissolution of East Germany.

Berlin is the capital of Germany and considered today to all intents and purposes one of the most important cities in Europe. But from 1961 to 1990 the city was divided in two by the Wall, separating the east from the west. 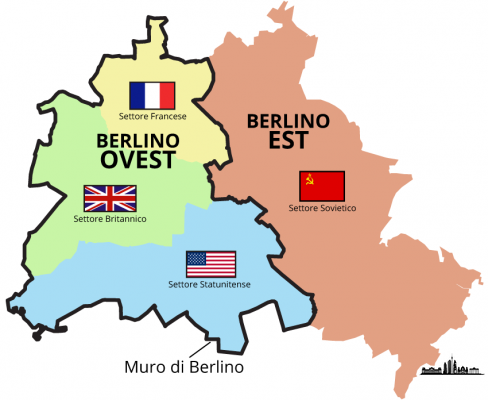 The East area was part of the German Democratic Republic (DDR) placed under Soviet control. East Berlin was initially composed of 8 urban districts (Borough) assigned to the Soviet occupation sector.

Friedrichshain, located immediately east of the city center and touched by the Spree river, characterized by large buildings made with the typical socialist architecture. In 1981, the Sport und Erholungszentrum (SEZ) sports center, the largest in the entire city, was inaugurated inside.

Second district was Koepenick, located at the south-eastern end of the city, where we can find the homonymous castle and the famous An der Alten Forsterei stadium in which Union Berlin, the second city team, trains.

Another very important district was the Mitte, literally the center, which corresponded, and still corresponds, to the historic center of the city. Inside we find Alexanderplatz, the main square of the city, the city station and the Brandenburg Gate, symbol of Berlin and probably of the whole of Germany.

The districts of Lichtenberg, Weissensee e Treptow they were located in the central area (later merged into the large district of Pankow). Prenzlauer Berg, until 1961, it was one of the districts with the highest population density, but when it passed under Soviet control, these implemented an architectural distortion of the neighborhoods, with the widening of the streets and the increase of green spaces, as well as the demolition of numerous ancient buildings. The neighborhood became famous in the late XNUMXs, hosting many opponents (from punks to evangelicals) of the GDR regime.

The West Berlin area was part of the Federal Republic of Germany. West Berlin consisted of 12 District (districts in Italian) and three administrative sectors, led by the US, UK and France.

In the US sector there were to be precise:

In the British sector we find instead:

The last of the three sectors of West Berlin was the French sector: it was located in the north-western area of ​​Berlin and consisted of the districts of Reinickendorf e Wedding, where you can admire the Siedlung Schillerpark, a residential complex considered a World Heritage Site.

The Topography of Terror in Berlin

Berliner Dom, the cathedral of Berlin

A day in Potsdam: What to see in the "German Versailles"