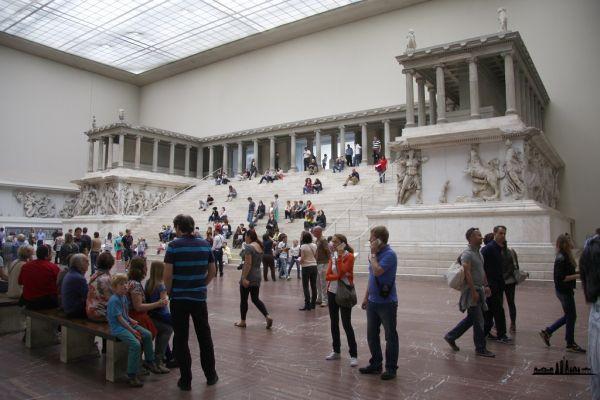 Among the most important archaeological museums in Germany and in the world, there is undoubtedly the Pergamon Museum, which takes its name from the ancient Hellenistic city of Pergamo in Anatolia, from which most of the works on display come. The Museum is located on Museum Island, on the River Spree, not far from the Berlin Cathedral.

The history of the Pergamon Museum

In 1830, Karl Friedrich Schinkel, a Prussian architect and painter, had the Old Museum built in front of the Berlin Castle, but soon this proved to be too small and it was necessary to build a new building, by the architect Friedrich August Stuler, the Neues Museum (New Museum), which allowed the exhibition of various Egyptian works.

Following new excavations in Olympia, in Greece, and in Pergamum, in today's Turkey, the heritage of the museum was enriched with new finds and it was therefore necessary to build a new building for the Greek works e Romance.


In 1930, therefore, the foundations were laid for a new building, which would later become the Pergamon museum, where it was possible to reconstruct the ancient buildings that emerged from archaeological excavations in natural dimensions.

The Collection of Ancient Art of the Pergamon Museum in Berlin

The first collection of the Pergamon Museum is the Antikensammlung, or that of Ancient Art. It is one of the most important collections in the world of Greek and Roman art and is presented in three separate buildings on Museumsinsel: in the Pergamonmuseum, in the Altes Museum and in the Neues Museum.

The museum of Pergamum, in particular, houses reconstructions of architectural monuments of Greek and Roman antiquity including the two most important works and imposing:

The Altar of Zeus from Pergamum

photo by Mark B. Schlemmer via flickrQuesta imponente e precious testimony of Greek civilization is the result of 8 years of excavations conducted in the city of Pergamum (in today's Turkey), led by the German archaeologist Carl Human and started in 1878.

According to the agreement stipulated with the Turkish government, Human was able to bring only half of the discoveries that emerged to Germany and among these there was the frieze at the base of the temple of Pergamum, 170 meters long. The upper part, on the other hand, is a reproduction of the part of the temple that remained in Turkey.

The Market Gate of Miletus

photo by Mark B. Schlemmer via flickr Miletus was one of the most prosperous, rich and important Greek cities on the coast of Asia Minor.

The sumptuous market gate, built in 180 BC, was then destroyed in the Middle Ages, but the excavations of 1903, conducted by the German archaeologists Theodor Wiegand and Hubert Knackfub, brought to light the ruins which were then transported to Germany. In the Pergamonmuseum the gate has been completely rebuilt, with the reproduction of the missing parts.

The room containing the Pergamon altar will remain closed at least until 2024 due to a major renovation project. The north wing and the hall of Hellenistic architecture will also remain temporarily closed.

The other collections of the Pergamon Museum

Vorderasiatisches Museum (Museum of the Ancient Near East)

The collection of the Museum of the Ancient Near East (Vorderasiatisches Museum) is located in the south wing of the Pergamon Museum occupies 14 rooms, in which examples of architecture, reliefs and other works of the civilizations of Sumeria, Babylon, Assyria and Anatolia are exhibited.

Among the most important works of this collection there is certainly the Ishtar Gate Via Processionale and Facade of the throne room of Nebuchadnezzar. In this wing of the Museum the model of the Babel tower and a copy of the Code of Hammurabi.

It has one of the most important collections of Islamic art in the world. The highlights are, in particular, some architectural works that are unparalleled in terms of monumentality and are not found in any other museum of this kind.

To avoid long queues at the ticket office, it is always advisable to book skip-the-line tickets in advance. Once you get there, it will simply be enough show your printed or smartphone voucher and enter, bypassing the queue. There are various options available: the ticket can be purchased, for example, in the form of a ticket valid only for admission to the Pergamon Museum or as a "combined" day pass which includes all the exhibitions on Museum Island.

SKIP THE LINE TICKETS FOR THE PERGAMON MUSEUM AND DAILY PASSES

The Pergamon Museum is open daily from 10am to 00pm and Thursdays until 18pm. Last admission, 00 minutes before closing time.

How to get to the Pergamon Museum

The Pergamon Museum is the most visited but it is not the only one on Berlin's Museum Island: read more about the other treasures kept on Museumsinsel!

Friedrichshain: The bohemian district of the former East Berlin ❯

Spy Museum: What to see at the Berlin Spy Museum

Hamburger Bahnhof: The museum of the present in Berlin

add a comment of Pergamon Museum: The archaeological museum of Berlin