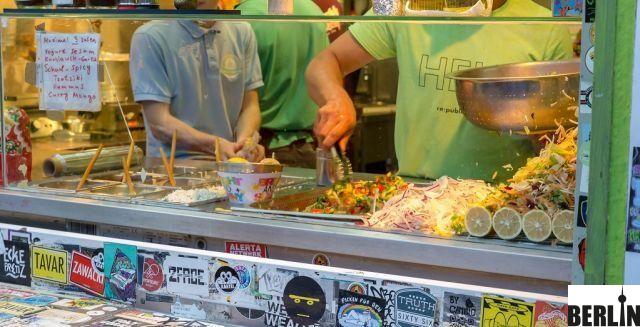 But remember, the Thursday night the appointment is at the market for it Street Food Thursday. The different stalls compete with their delicacies in a culinary competition in which visitors are the winners.

Every third Sunday of the monthin addition, the Breakfast Market where to find everything you need for breakfast: artisan knives, roasted coffee from independent producers or cookbooks. Every quarterinstead, the Market hall nine invites everyone to Naschmarkt: sweets, cakes, biscuits of all kinds, chocolate, macarons, honey and pralines will be a paradise for children.

Il Market hall nine hosts numerous events such as the festival "City Country Food", the"Berlin Coffee Festival", the"Cheese Festival" and the "Sausage & beer". The merit of the success will certainly be the" good, clean and fair "food in compliance with the principles of slow-food.

The Turks form the largest foreign community in Germany, hence the Turkish market it is an unmissable stop especially if you are in Kreuzberg. Lose yourself in the aromas and flavors of Middle East where Berliners also go shopping.

Clearly al spice counter you will find more than a few tourists intent on taking pictures, but go ahead and taste the specialties of turkish street food:

stew of the Anatolian ladies at Mamas Food Manufactur, or the traditional Börek with meat or cheese, and the Gözleme, a typical stuffed pasta.

Don't miss the Turkish pastry: baklava or Turkish delight? In any case, remember to haggle a little for the price. Open Tuesdays and Fridays from 11am to 00pm.

Right next to the Mauerpark, the Berlin Wall Park, in the Prenzlauer Berg district, is the most hipster flea market in the capital, frequented by tourists and New Berliners. The Mauerpark it is an institution for those arriving in the city.

On Sundays, stroll among used bicycles, cases of vinyl, clothes and memorabilia from the past. Or take a seat in one of the neighboring cafes to watch passersby on a reggae background that comes from the central stage.

If you prefer eat something on a budget, you have stalls of currywurst, hamburgers, grilled fish, corn on the cob, crêpes, fried potato skewers and other delicacies everywhere at your disposal.

Whether it's summer or winter, the Mauerpark is a riot of energy until sunset. Open on Sundays from 9am to 00pm

If you want to try real Thai street food go to Thai Park on the lawn of Preußenpark. In the summer weekends, Asian women will prepare the specialties of the Thai cuisine among colorful umbrellas as if you were at a Bangkok picnic.

For vegetarians we recommendpapaya and mango salad. All to be accompanied with refreshing fruit-based cocktails or mango lassi. Smile, you are in Thailand. Open on weekends in the summer months, from Friday to Sunday from 11am to 00pm

Intertwined arches, wrought iron motifs on the columns, corridors with arched windows: Arminiusmarkthalle it will seem like a gothic church but if you look down you will find it the best of German gastronomy and international.

Arminiusmarkthalle is Moabit's historic covered market opened in 1891, damaged by World War II and rebuilt in the 50s, finally completely restored in '96. Today frequented by real Berliners, the market will give you an idea of ​​life in the Kiez neighborhood.

In this period setting of approx 3500 square metersi, you will find dozens of stands, shops and restaurants of various kinds, bars, pastry shops and bakeries, wineries, fishmongers, cheese and meat counters, bookstores, florists. If you can, drop by on Tuesdays from 19 to 20.30 pm for the Food Assembly: farmers and ranchers sell fresh produce from Brandenburg.

The Arminiusmarkthalle supports zero-kilometer agriculture, but is also the setting for various cultural and gastronomic events in the evenings or sometimes on Sunday mornings. Open Monday to Saturday from 8am to 00pm

Former XNUMXth century brewery today it is a cultural and gastronomic center in the Prenzlauer Berg district. In one of the six courtyards of the immense Kulturbrauerei you can go around the world among the stalls of the truck food.

Start with Italian pizza from Il Viandante, to continue with the Korean cuisine da Miss Kimchi, le Mexican empanadas de La Criolla, or the Mongolian dumplings from Ulaan Bator, to the Sudanese specialties of Bruce Hempel and the beef cider steaks at the Comptoir du Cidre. The market is open on days when the weather permits. Otherwise it will be transferred to the Frannz Club premises next door. Open on Sundays from 11am to 00pm

Mustafa's, the best kebab in Berlin

To see this white and yellow kiosk next to the Mehringdamm metro station, in the Kreuzberg district, you will certainly not want to stop.

And yet Mustafa's is universally recognized as the best kebab shop in Berlin. So set aside any reservations and taste the real döner kebab before judging.

Spiced chicken meat is served with fried vegetables, chips, crumbled feta, mixed salad, a squeeze of lemon and a trio of sauces that most people eat all together.

For the Vegetarians there is the Voner version, stuffed with very tasty vegetables and fried potatoes. As an alternative to kebab in the classic sandwich you can try the dürüm, the flatbread. I assure you, it is worth waiting even half an hour to eat at Mustafa's. Open Monday to Friday from 10am to 00am. Saturdays and Sundays from 2:00 to 11:00.

Bringing street food to the party, this is the concept of Bite Club, the new protagonist of the Berlin street food born in 2013. It is a traveling market that offers culinary experiences in the various events of the city, the Bite Club in fact he appeared at the Berlinale and al Berlin Food Week.

In the summer, however, it turns into one street party aboard the Hoppetosse boat, moored along the Spree. Whiskey bars, cocktails, craft beers and ethnic food of street are accompanied by DJ sets and disco-wave music. Check the official website for upcoming events.

add a comment of The best street food addresses in Berlin