Who I am
Thomas Proske
@thomasproske
EXTERNAL REFERENCES: 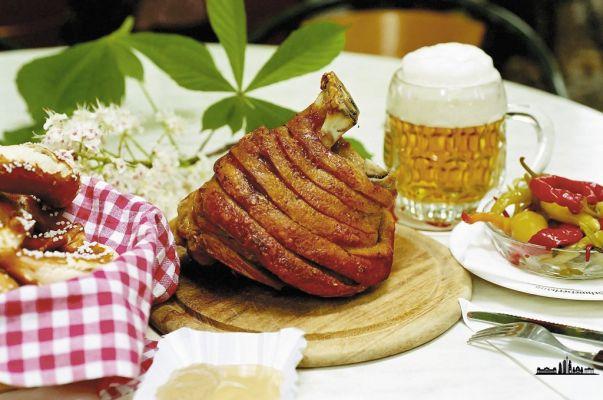 An ancient and substantial cuisine that begins with the starters

When you have a menu with a list of scary names in your hands, you need help choosing. Are you ready for the taste adventure?

La Berlin cuisine and of East Germany it goes straight to the point, it is simple, abundant, tasty and is foreign to refinement. The gastronomic influence is still that typical of East Prussia and the privileged element is undoubtedly there meat. Usually we start with a starter, a low / medium consistency dish with which to start the meal. One of these is the Sülze one "pork knuckle"Precooked and then boiled, covered with jelly, usually served fresh and belonging to the group of cooked sausages. For the more fearful I recommend one soup: strongly linked to the costume is the Sauerampfersuppe the “sorrel soup”A perennial herbaceous plant, a light and tasty dish.

Let's move on to the dominant dishes, the Königsberger Klopse are tasty meatballs, cooked and served in a white sauce with flour and capers, at the time of DDR chiamate "Kochklopse" on "cook meatballs". Let's stay on the subject with the Gepökeltes Eisbein mit Erbsenpüree means "corned pork shank with pea puree”Is a rather fatty meat that is cooked for a long time, it is very tender and aromatic. It is typically boiled or grilled, and can be easily detached from the bone.

Tradition of own Berlin cuisine is the Bollenfleisch, for the natives of the capital Zwiebelfleisch (onion meat), is one lamb and onion stew, obtained from a long cooking that makes everything soft and creamy.

Let's move on to offal with Gebratene Leber - Berliner Art, the "Berlin-style fried liver"A typical Berlin dish based on veal liver, cooked in abundant butter with fried apple slices and onion rings. Classic side dishes are potatoes and carrots, cabbage or lettuce.

Blood and liver sausage with mashed potatoes è una "liver and blood sausages with mashed potatoes”, The name is a little scary, they are sausages that are generally served together, one based on liver and the other with black pudding, combined with lard, rind and spices. It is a spreadable sausage, considered one of the oldest types, because it was already mentioned in Homer's Odyssey.

There is no shortage of birds

Another tempting alternative is the Gänsebraten mit Grünkohl und Klößen, in Italian "roast goose with kale and potato gnocchi".

To end the meal on a sweet note

Finally, there is always the dessert. The German people are very skilled with sweets, beautifully filled cakes, not only beautiful but also good, but let's discover some traditional gems. One of the best known desserts is certainly the Apfelstrudel ie "the apple strudel”A puff pastry or yeast dough with an apple-based interior.

We conclude with a delicacy, the Kartoffelpuffer mit Apfelmuß or "potato pancakes with apple mousse”A recipe belonging not only to the German tradition but typical of much of Eastern Europe.

These and others typical German dishes you can find them in Berlin's most characteristic restaurants and in the so-called Kneipen, the traditional "tavern”In pure Germanic style where the Germans love to consume countless goblets of beer and some good hot dishes, even if, more often, these are limited to offering small and particular dishes.

Where to eat in Berlin: Restaurants, Kneipen and street-food ❯

add a comment of Typical German dishes in East Germany